Kingdom Under Glass: A Tale of Obsession, Adventure, and One Man’s Quest to Preserve the World’s Great Animals by Jay Kirk 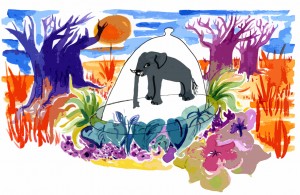 The relationship between man’s empire and nature is critical, as we are finding out today. Overwhelmingly the relationship is one of sheer exploitation, but the style and content of our attitude towards nature in all its forms has taken vastly different form in different societies.

Nature and empire is an impossibly sprawling and complex field, encompassing everything from Temple Grandin and humane slaughterhouse practices to the fracking controversy to the history of British gardens to modern genetic recombination. We need nature’s stored energy and stored beauty, but we seem to be tragically clumsy in our extraction of it. As to animals in particular, we cherish wildlife in zoos and children’s movies even as we demolish it with our insatiable demand for its habitat. Recent books like Andrea Wulf’s The Brother Gardeners and Jorge Cañizares-Esguerra’s Nature, Empire, and Nation explore how different cultures capture nature, both in commerce and in the imagination.

In his new biography of the early Twentieth Century naturalist Carl Akeley, author Jay Kirk examines many of these contradictions: Akeley, sometimes labeled the father of modern taxidermy, was a hunter (“collector”) as well as a preservationist, a safari explorer as well as museum curator. Coming at a time when Americans are coming to terms with their own “empires” of nature, the book raises timely questions.

Objective: Read the book review of Jay Kirk’s Kingdom Under Glass and the interview with the author, then discuss Kirk’s depiction of Akeley and his relationship to the natural world.