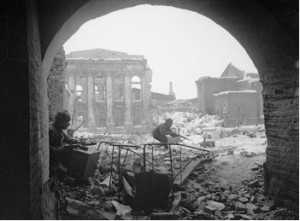 As a teacher, I have found the Battle of Stalingrad to be instructional treasure.  It is such a vast topic, one so little-known by American students, and one that it is almost endlessly engaging both for me and for my students. So many mini-dramas – from the “white witches” to the sniper duel made famous in the movie Enemy at the Gates to the civilians bravely taking part in the war beneath the city streets — comprise the overall tapestry that it could fill half a semester.

Many of the most valuable teaching elements of Stalingrad have nothing to do with armaments and military strategy and everything to do with critical thinking and cultures.

This battle can lead students into closely related topics of morality, organizational management, logistics, leadership, and mistakes. I write this as an English teacher, not as a military historian.

One valuable idea about Stalingrad is that it — and not the Invasion of Normandy — won the war. A new path to understanding World War II has a wide appeal, since so many students them are familiar with films like Inglorious Basterds and Saving Private Ryan and computer games like Call of Duty. This is a clear example of the power of narrative. Western writers have told hundreds of stories from World War II, from the smallest episode to the grand invasion, Normandy. We have very successfully dramatized – “narrativized,” as a literary scholar might say – our own part the war. Yet we have omitted some of the best stories – particularly, I think, those from the Eastern front – because Russians fought in those battles, and not Americans

A third important aspect to studying this colossal battle is as a lesson in unintended consequences. There is no more vivid example of how war can quickly devolve into slaughter. Stalingrad generates comparisons with other battles, and students need to understand the full range of warfare. Studying the Battle of Stalingrad is not just for military historians. We are all at war. Stalingrad is a re minder that combat like this is not limited to the soldiers who represent our interests on the front line. The Soviet Union and Germany forever lost an entire generation of young men. What would these two million young fighters have accomplished in the 1950’s and 1960’s? What might a robust wave of returning Russian GI’s — and the baby boom they would surely have produced – have meant to the world? It is a question with no answer. 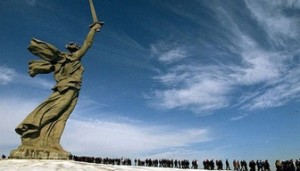 The interview below is reprinted with permission from Radio Free Europe/Radio Liberty. A special thanks to Luke Allnut.

The original version of the interview can be viewed here:  http://www.rferl.org.

The ellipsis […] in the text mark passages which the interviewer deleted from the original interview.