Bringing Her Home: The Woman in Herman Melville by Claudia Dixon 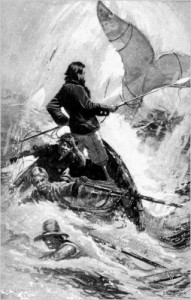 Last week, my students and I were considering a haiku about the wind from Mount Edo when one of my best cadets, Dawsey, asked out loud if the poet who wrote it (Basho) might be laughing at us for trying to read so much into his casual little verse. After all, it’s only 17 syllables. What’s the point of analyzing 17 syllables so closely?

It is a question every student asks, sooner or later. I didn’t have a direct answer for Dawsey, except to say that Basho has been dead for 400 years, so he is probably not laughing at anyone still reading his poetry. I don’t have an answer for Dawsey, but I do have an explanation for my own interest in these breakdowns: the more deeply we can understand one poem, and take it apart and put it back together, the more chance we have to understand anything. If we give a literary work a quick pass, we lose.

In her 300-page dissertation, Bringing Her Home: The Woman in Herman Melville, Claudia Dixon takes a good, close look at Melville and comes up with this powerful idea:

The essential mystery of Herman Melville’s life, the one around which all others revolve, is his hidden feminine identification, which troubled his domestic life and found ambiguous representation in his art. I challenge the conventional biographical interpretations of his life and work to reveal the unrecognized feminine second self inside the man.

We often forget—at least I often forget—that Melville was not particularly successful as a writer in his lifetime. He was rarely secure financially. He wrote Moby Dick during a time when he was forced to live with his mother, and part of Dixon’s thesis is that this unhappy situation helped produce the anguish and passion of Melville’s storytelling.

Claudia Dixon is a bold thinker and a natural writer. I wish writers like Claudia Dixon were producing all of our textbooks. You can see a little of both her wide knowledge of the subject and her clear writing ability in these two excerpts from her dissertation:

Melville’s first two novels, Typee and Omoo, belong to the giddy period of  adult freedom and exploration before he was married. As literature, they are markedly different from the novels and stories that came after them. That is because the rest of Melville’s work was written in the crucible of marriage and family life. Though the first two novels contain captivity scenarios, they are a far cry from the imprisoned Ahab’s furious struggle against invisible bonds.

Robertson-Lorant suggests Melville’s inner struggle during the writing of Mardi. “‘Wild’ was how he felt while he was writing Mardi. He could feel dark undercurrents tugging at his soul as he searched for a way to express what had gone unsaid in the two travelogues for which he was famous” (176). What had gone “unsaid” was Melville’s feminine identification. Robertson-Lorant claims that Melville’s genius is “his ability to heal himself by writing” (177), but she neglects to say what infirmity or condition he needs to heal in himself. I believe he writes to both liberate and mourn the woman in himself.

In chapter three, she looks at Melville’s friendship with Nathaniel Hawthorne, and how much it meant to Melville that a fellow author understood what he was trying to do. Here is how she describes Melville’s feelings of despair and entrapment:

Feeling trapped in a double bind of wanting what he could not allow himself to have, and what his family and his culture’s norms would not allow, he vented his rage upon those close at hand. It is clear that Melville desired to be free of domestic concerns and the necessity of providing for his family. As he wrote to Hawthorne, “I am pulled hither and thither by circumstances…dollars damn me and the malicious Devil is forever grinning in upon me, holding the door ajar” (Norton MD 557).

In the following interview and excerpt from her dissertation, we see a hint of the author’s grand reinterpretation of Melville.

Objective: Examine the work of Herman Melville through a new lens by reading Claudia Dixon’s dissertation and her interview with the Journal of Empire Studies. Consider Dixon’s thesis that Melville, despite his public life as masculine and heterosexual, was haunted by a hidden feminine identification, and evaluate his writing in this context.